Seoul – Doing The Impossible in The Big City Jungle 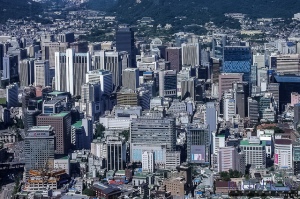 Hotel reception desk in Seoul. I want to check in after a long, two-day flight from Germany.

This is the moment where I realize I have lost my passport in a giant 10-million-people city, 10,000 kilometers away from home, in a country whose language I can’t speak, and whose scripture is incomprehensible for me like the enigma code.

It is around 9pm, I needed 2 hours to get here from the Incheon airport, sitting 70km away on an island. The check-in itself is not a problem, they accept my driving licence, but Seoul is just the first part of my travel.

I am here on a mission, on a mission to work out the mindset of the most successful entrepreneurs on the planet, the wealthiest people on Earth. Interviewing a mobile industry giant, a self-made billionaire here in Korea is only a small part of the mission. In four days I am, or more correctly: I was about to fly to Australia to interview currently the best entrepreneur in the world, the World Entrepreneur of the Year 2016. He expects me in Melbourne, we set up two days just for us some time ago. But for this I need a valid passport and a visa. And the visa I was granted was valid only for the passport I have lost. They just won’t let me in. My 3 continents trip is falling apart and that can also be dangerous for my global book project. It took me some time and effort to get to the best entrepreneur in the world and convince him to participate. He will surely not accept it when I call him to say “sorry, some other time, I lost my passport.” He will surely doubt my seriousness and may deny rescheduling. Not mentioning all the money lost by the unused tickets and hotels.

I explain it to the receptionist. She seems not to understand everything, but offers to just call the Lost&Found office at the airport, maybe due to the fact that there are several money exchange offices at the airport and several bus ticket desks, so it would be difficult to find out and get through to the right one. The Lost&Found didn’t find it but are going to call back. Then I ask her to call the bus company and ask to instruct the driver to look for the passport in the bus. They should be able to identify the bus driver since I know which bus number it was and when it left the airport. They are also going to call back.

“Don’t worry, Sir”, Grace tries to appease me. She tells me to patiently wait for the airport and the bus company to find my passport. “I will call you in your room when they call back.” She doesn’t realize the severity of the situation. And it is not about the passport itself. It is about whether I can get to the Australian interview or not.

In life there are situations where you need to hang in and invest all your energy and creativity to solve them to the best of your possibilities, setting everything else aside for a moment. These situations decide about your success or failure. You need to fight to your best, to hang in.

This emergency throws all my plans overboard. I am meeting the Korean billionaire tomorrow in the early afternoon, wanted to finish my preparations for that, but I have to prioritize and the passport issue has the highest priority now. It will make or break this trip, it could destroy my entire project, I have been working almost three years on. I will have to invest all my spare time on it, and there isn’t much of it, considering the fact, that I am spending two next days with the Korean giant of business.

I move in and call the embassy. It is closed. I reach only their emergency service, an only generally informed employee. He tells me they would need 4 working days to make a temporary passport for me. For that they need a confirmation of passport I can get from the local police. The moment they receive that confirmation, they cancel the old passport, making it invalid and start the process of issuing a new one.

What does it mean for me?

Firstly, I will have my passport at earliest on Tuesday next week, to late to reach my plane Saturday this week, and I have the interview on Monday already, one day before they would issue my new passport. No passport, no international travel.

Secondly, even if I had the passport on Friday (meaning after just one working day), it will be too late to apply for visa if I want to board the plane on Saturday. They need several days between application and entrance and the dates just don’t work out.

Thirdly, even if the dates worked out, I couldn’t apply for Australian visa with a permanent passport the embassy would issue.

Fourthly, if I try my luck to at least get any new passport next morning, my old passport will be canceled, and I will lose the chance to go to Australia in case I actually find the lost passport.

The situation looks pretty gloomy, and the chance of getting to the interview in Australia on time microscopic.

Nevertheless, you have to fight, even if the chance of winning seems negligible, because the cause is worth fighting to the end. And my only chance is to find my lost passport. Trying to accomplish it is the best I can do now, the best way I can invest my time, even if finding it in this huge town after hours and hours of loosing it is close to impossible.

Meanwhile, it is getting close to 10pm. I haven’t received any call.
I come down to the lobby again, ask Grace if they have called back. They didn’t. I ask her to find out the opening hours of the Lost&Found office at the airport. It turns out they are open 8am to 10pm and close in less than 10 minutes. I ask her to call them again and ask if somebody has brought a lost passport. Nope, nothing changed. The same with the bus company.

“I am going to the airport”, I announce, knowing it will take me up to 2 hours to get there and another 2 to get back. “But the Lost&Found office will be closed and the airport empty. There are no flights at night.”, she tries to convince me to stay and wait. But I can’t wait. Next morning I have to decide whether I go to the police station to report a passport loss or not if I don’t want to get stuck in Korea for good. And I realize, next morning she won’t be there to continue and I will need to start my search from scratch again.

The convenient, direct SkyBus I came to the hotel on doesn’t circulate at that day time anymore so metro is my only chance to get to the airport. My plan is to first check out the money exchange office, then the bus ticket desk and if they haven’t found any passport to make them call the bus driver again. If this fails, since the Lost&Found office is closed, the airport police is the last chance. Maybe somebody has found the passport on the floor and brought it to the police station there. I need to get it before they pass it to the embassy to invalidate it.

I arrive at the airport at 11:30pm. The airport is empty, hardly any stand open. Just some people from security. On the way to the money exchange office I pass the bus ticket desk. It is closed and only a security guy is there. It doesn’t give me much hope for the success. But I keep to my action plan.

The money exchange office is also closed, white curtains rolled down. But I can see light behind the curtains and, coming closer, there are two girls and a guy inside, probably two clerks and a security person. I pull one curtain to the side and call them saying I have lost my passport here. The security guy immediately leaves the office to meet me at my side of the desk and curtain. But at the same time, one of the girls seems to get something in her hand from a drawer. It looks like a german passport, indeed it has a wine red color like mine. She opens it, looks at me and wants to reach it to me between the curtains, seemingly recognizing me from the picture in it. Meanwhile the guy approaches me on my side of the curtain and not speaking english, indicating insistently with his hands, they are closed and shouting something aggressively in Korean. In this moment I reach with my hand between the curtains in order to get the open passport, which I now see is for sure mine. The guy, having other perspective, sees neither the girl nor the passport. He sees only me reaching between the curtains and getting something from behind them. It is a MONEY exchange office and he is responsible for its security. He probably assumes I want to rob them, jumps closer and tries to break my arm with a karate strike. Luckily, I manage to get the passport, redraw my hand on time for him to fail his strike. I show him the passport telling him it’s my passport I have lost here. He immediately changes his face expression, smiles and excuses himself for being too quick in his conclusions. I thank to God he wasn’t armed.

This way I managed to find my passport 5 hours after loosing it in a 10-million-people city, in a seemingly hopeless situation. I had to improvise on the way back, since the metro also closed at midnight, but at 1:30am I finally got to the hotel and after a short sleep could continue on my mission (almost) as if nothing happened.

The experience confirmed me in my strategy to put all my resources into an issue if it has a vital importance. Only then we have the chance to “get lucky” and accomplish the impossible.

But if you think this story is crazy and I just was too lucky, then you don’t know what my friend experienced when his passport was stolen in Kiev’s metro, in the wild Ukraine of 2008. It was many years ago, but what he did there earned my lifelong respect and I remember it until this day.

You will read about it in my next article.

I wonder how this story inspired you. Please share your impressions, remarks, conclusions with me and other readers in the comments below. I will also happily answer your questions.